Worth of Influencers – How much should you pay?

If you’ve been following social media in 2019, you’ve surely heard about the ominous “World Record Egg”.
A simple yet ingeniously executed idea that took over the record for being the most liked image on Instagram ever.
Or maybe you’re following a virtual influencer like “Lil Miquela”?
And while you may have heard about the Influencer Egg a few weeks ago, did you ever follow up on its account? As it turns out, this egg is not so simple after all.

Because now it’s cracking up:

We chose these unreal influencers as entry points for this article because there is a question, which every company needs to ask itself when doing influencer marketing in 2019:

How much is a human influencer actually still worth?

No time to lose? Click here to jump right to the price calculation.

While it can be interesting to invest in entire campaigns around virtual accounts and virtual “influencer” objects, there are still human beings out there that can help your business grow significantly. In this article, we’re exploring the factors that, taken together, make up for pretty good rating systems that allow you to chose and measure your influencers.

As social media as a technology grows, so does its surrounding talent market. There are more and more influencer agencies coming into existence that to some degree share similarities with traditional model or other talent agencies. New laws are coming into existence or being rewritten that force brands, agencies and influencers to properly disclose paid content which is the biggest form of revenue for most influencers.
By recommending a product or service on their channel, influencer marketing appears just like a trusted recommendation from a friend: a great way to raise awareness about a new product line or campaign.
The most important influencer platform is Instagram with the highest numbers of views and engagement (around 3-5%, almost double than most other platforms). In this sense, we’re mostly focussing on Instagram influencers in this post. Other important influencer platforms are Youtube, Twitch, Snapchat and Pinterest.
Additionally, around 90% of professional influencers are still running a blog or website, which can be used for promotional purposes as well.
For this article, we define an influencer as someone with at least 5000 followers or subscribers. Everything below would be considered a micro-influencer, or even nano-influencer if he, she or “it” (in the case of eggs for example) have less than 1000 followers.
While most people think of Influencers as bloggers or celebrities (sportspeople, actors, or other artists), alternative important influencers are for example journalists (who write for important newspapers), thought leaders (like for example Gary V. or Tony Robbins) or Business(wo)men (like Elon Musk or Vitalik Buterin).
The eco-system is composed of different markets and every influencer usually operates in only one of them.

The biggest influencer markets are: 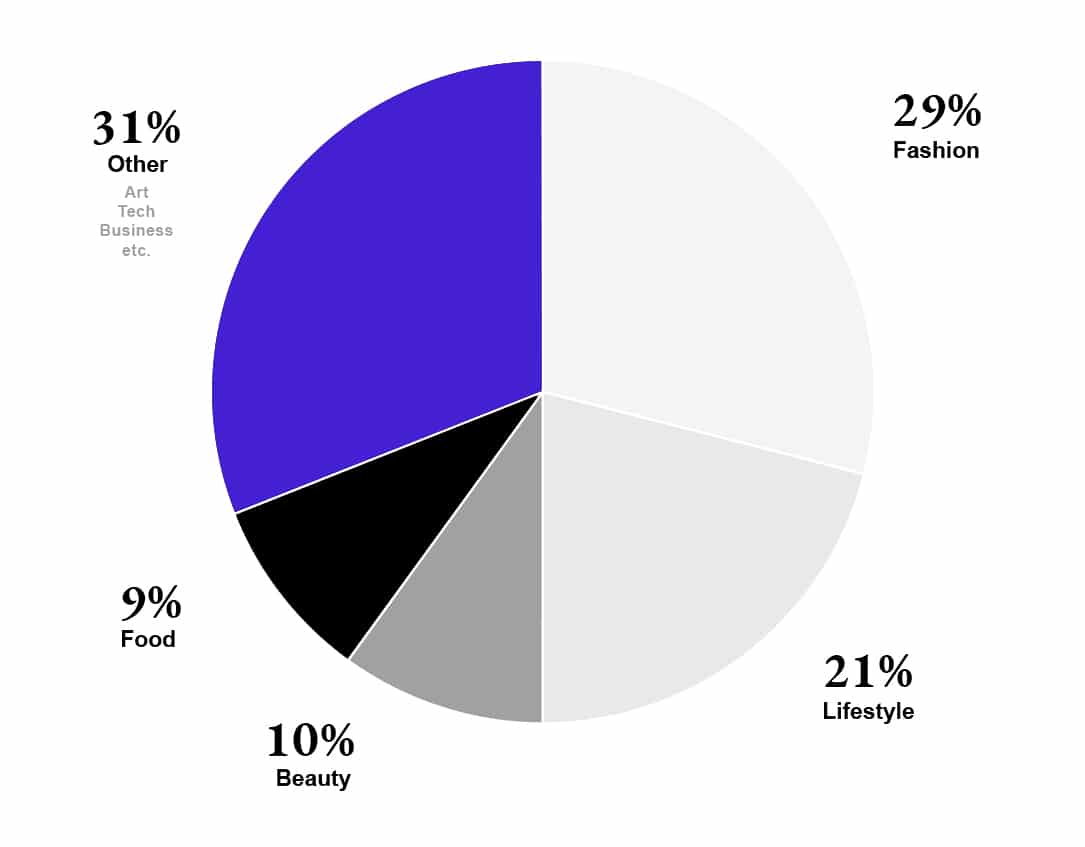 For brands the most effective strategy right now are long-term partnerships, meaning influencers acting as “brand ambassadors”. As stated in “collectively”’s 2018 influencer report, 54% of influencers saw an increase in engagement, when posting about a single brand over time, combined with a 61% increase in positive brand feedback with said brand.

In a report from later.com brands stated that around 60% of them pay under 250€ per post, while 30% pay between 250€ and 1000€. The remaining 5 to 10% go to big accounts and celebrities.
For so-called in-kind posts (posts paid via goods or products), almost half of all influencers consider posting, even when receiving the products without being asked.
According to various data sets, around 30% of brands worked with influencers in 2018, however, the number is expected to grow in 2019.

Depending on the followership an influencer has, prices will obviously vary. This is why it’s important to differentiate between them and put in place a few measuring pillars.
These pillars are (for example):

While businesses usually rank engagement rates as their most important ratio, influencers themselves tend to believe that the amount of followers counts most.
A rookie mistake many accounts make is simply buying fake followers without engagement and thus putting quantity over quality. These practices were fairly common a few years ago, but today a trained eye will quickly see that engagement and follower ratios do not match up and realize that the want-to-be influencer is not worth what he claims to be.
Therefore you should always check accounts for their authenticity, for example by using our Instagram Follower Checker. 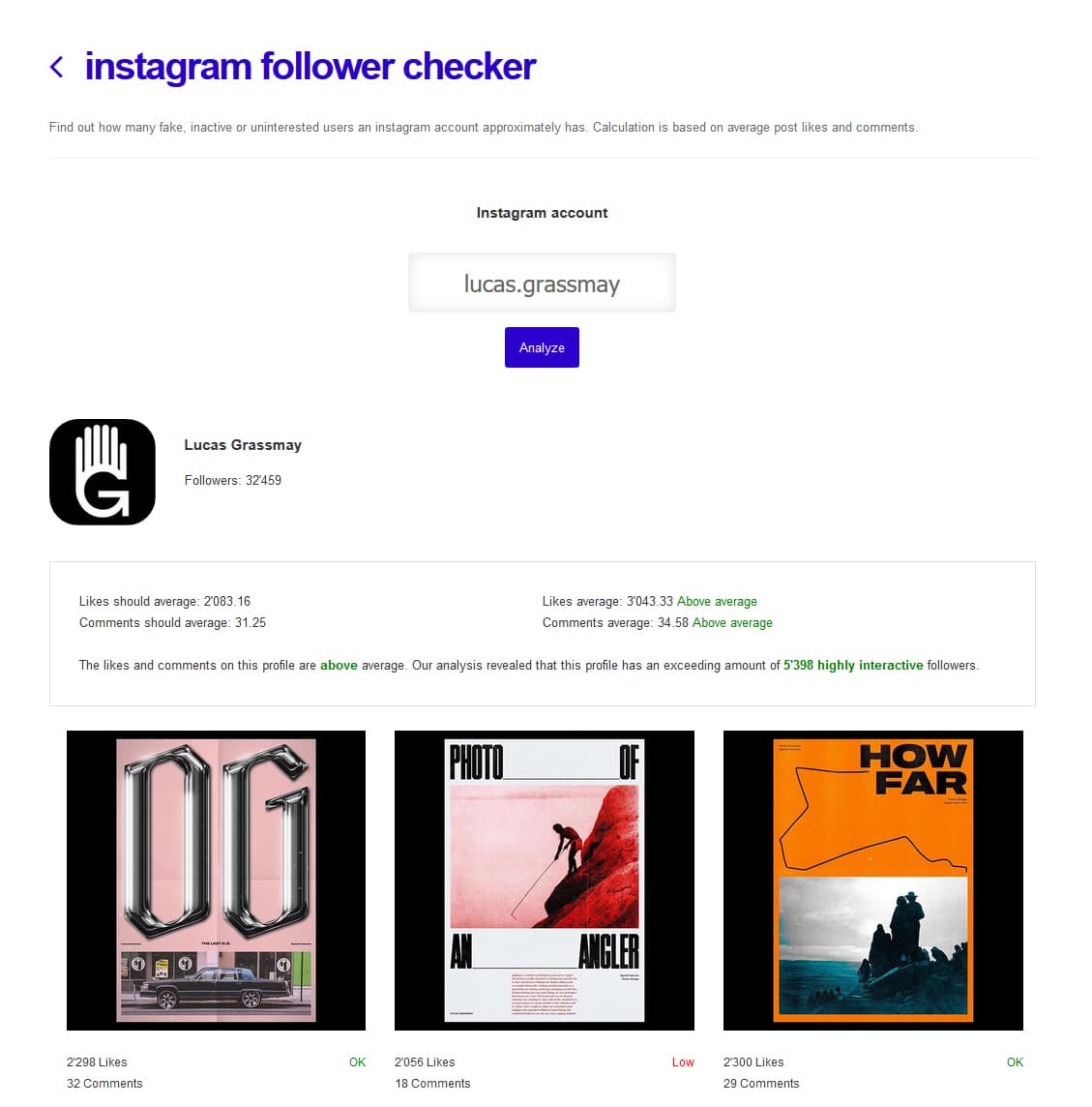 The higher the score the better and the more money the account can ask for a sponsored post.
Depending on your region, it can be hard to find authentic and popular influencers. Countries like America, Germany or the UK have more celebrity influencers than smaller countries like Luxembourg or Belgium where it can be hard to find the right ones (especially when you’re additionally operating in a smaller niche market). In this case, you should look into other regions too, as many people from smaller countries still follow influencers from abroad.
Finally, it should be evident that the most accessible metric for the pricing calculation is the follower amount. Typically, small businesses have a limited amount of money, so you should target smaller accounts, whereas the bigger your business gets, the more money you should spend on your influencers too.
No matter which campaign you’re working on, using influencers as a means to increase the trust in your product is an incredibly important step and you shouldn’t neglect the costs for it in your financial planning.
If you’re posting pictures with a model/influencer/actor etc. the best case scenario for your brand is when the comments under your picture turn from generic “thumbs ups” to personalized feedback related to the featured model.

Now that you know the basics, the important question remains: How much should you pay?

As a great starting point, you can use the generally accepted one cent per follower rule:
This translates to: 100€ per 10’000 followers, or 10€ for 1000 followers.
Afterwards, you look at the other factors mentioned above, like the engagement rate, region or industry.
Influencers in niche industries or regions can typically ask more per follower because there’s less competition: Supply and Demand.
A higher engagement rate obviously leads to higher prices, although in this case, you should double check this rate for authenticity. A common practice on smaller accounts to artificially boost engagement rates is to comment massively on own images or to buy likes/comments on said posts.
When in doubt, you could opt for a report on how often images were “saved” or consult other post insights, as these factors are harder or impossible to fake.

So how much would the world record egg be worth?

By the time of writing, the account has 9.2 million subscribers. With the one-cent-per-follower rule, they could theoretically ask around 100’000€ for a single post. An insane amount if you ask us, so we made some further checks using our Follower Checker Tool over at neontools.io. Since the egg became famous because it holds the record for the most liked Instagram post ever, it is obviously rated extremely suspicious by our algorithm. Engagement numbers are way higher than generally, but ironically in the case of the egg these numbers are making the account even more powerful. In other words: Whatever comes out of this egg, it’s going to be worth millions in the long term.

Now if you’re working with human professional influencers or bloggers they typically have their own price lists. Every professional influencer should know their engagement rates if you ask for them and they should be able to give you some feedback on typical reactions to their posts.
Price lists often feature combinations of posts, like for example:
etc.
Another possibility, especially if you’re short on cash, is to collaborate on an affiliate basis. This means that the influencer gets paid (or paid more) if their campaign leads to successful sales. However, this can be risky for both parties, as it is often difficult to prove clearly where the sales actually came from.
In this article we’re mostly talking about Instagram. Depending on which influencer you’re working with, you might want them to post your product on various channels. Be aware that making these posts takes time and thus costs money, so make sure to decide on the most effective ones. When in doubt: test them and see what works best for you.
Finally, you need to consider what your collaboration will look like. Do you simply send the products and leave the artistic work to the influencer? Will you hire a photographer? Do you shoot in a location you need to pay for? In need of special props or clothes? How much work is it to make a great post?
All these factors play together in the calculation of a price, so depending on the set-up, be aware that you might want or need to pay more.

My fav moment of the day ☕️???! When in @andazams make sure to taste their vegan pancakes and homemade cookies. They are to die for! #ad #WheninAndaz

How to measure success?

Most businesses simply use engagement rates as their most important metric, however, there is a sentiment that this is going to change in the future. Sales, traffic and brand sentiment are amongst the new important goals that can be achieved using the right influencer marketing strategies.
In order to track where your sales and traffic comes from, you should use tracking UTM parameters in your URLs. Those are simple tags you put in your URL, which you can then track with analytics software like Google Analytics. In order to generate those tags, feel free to use our UTM Generator.
Use this in combination with URL shorteners like bit.ly and you’re good to go.
Tips for brands
Tips for Influencers
In the end, we want to say that no matter which form of Influencer marketing you decide to use for your business: it’s one of the most powerful marketing forms available and you definitely shouldn’t miss out on it.